Sacred geometric images found in Buddhist, Hindu and Jain art, mandalas are symmetrical circular forms that typically comprise a central deity surrounded by motifs and symbols. Often used by devotees as a meditation tool, a mandala is intended to function as a spiritual map or microcosm of the universe, which one may travel along to merge with the central figure, and a consecrated, sacred space that can serve as a ground for the gods. When hung in temples or monasteries, mandalas are also thought to have a talismanic power, protecting the structure from destruction or deterioration by reinforcing the space spiritually. The structure of mandalas varies from one religious context to another, with the most elaborate and codified ones found in East Asian sects of Buddhism, particularly Tibetan, Pure Land and Shingon Buddhism. A mandala may be painted on paper or cloth such as in Thangka paintings, as well as drawn on ground with white and coloured threads or rice powders. In some instances, it may be fashioned in bronze, or rendered in stone, like it is at the Borobudur in Java. 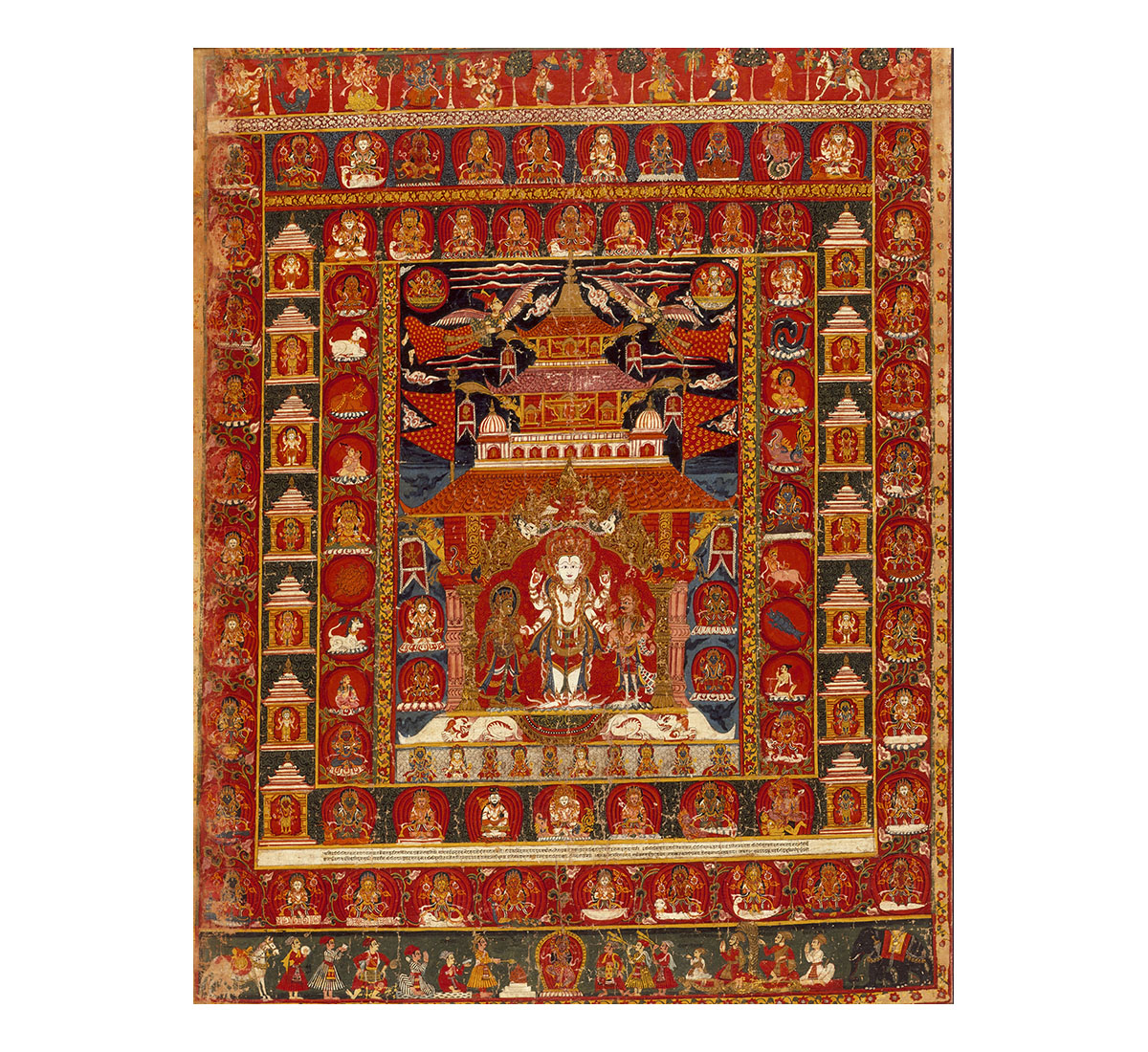 Depending on their definition, different scholars may trace the origins of the mandala to different points in south Asian history, with some suggesting that the Pashupati seal found at Mohenjo-Daro could be seen as a mandala, as it consists of a central deity surrounded by symbols from his realm. Similarly, a relief image in the Kanheri caves, dating back to the sixth century CE, is considered a mandala because it appears to depict the Buddha surrounded by four identical others, possibly an early instance of the Five Tathagatas. It has also been posited that the circumambulation of stupas and certain Buddhist pilgrimage routes can be read as geographical mandalas through which devotees have to physically travel. Other scholars argue that it is only after Buddhist iconography developed enough for each Buddha and bodhisattva to have their own set of distinguishing symbols, that mandalas have been made as a spiritual template. It is generally accepted however, that the mandala was fully realised in its current form in Tibetan Buddhism by the eighth or ninth century. Thangka paintings from as early as the eleventh and twelfth centuries feature complex mandala diagrams and intricate mandalas are also present in the murals at early Tibetan sanctuaries and monasteries, such as Tabo, Alchi, Sakya and Gyantse.

Towards the end of the first millennium CE, a more elaborately structured Vajrayana Buddhist imagery developed in the eastern and northern Indian subcontinent under the rule of the Pala dynasty, particularly at the centres of Nalanda and Kurkihar. These were heavily influenced by Tantric symbolism, which was layered onto existing Buddhist iconography and adjusted to reflect core Buddhist principles and ways of envisioning the world. It is during this period that new, visually impactful ways of representing Buddhist figures and the cosmic order emerged. These primarily took the form of mandalas as well as the many-limbed and many-headed forms of bodhisattvas. The concentric shapes of a mandala’s structure, which enclosed the central Buddha or bodhisattva figure, were populated with images of associated symbols and deities – symbols that had also been depicted as objects held in the many hands of Tantric deities, where they likewise appeared to emanate from and surround the figure. Such visually potent imagery was meant to enhance the devotee’s meditation practice and provide a faster path to enlightenment. Notable mandalas established in India before the decline of Buddhism include the Ashta Maha-Bodhisattva mandala, which shows eight major bodhisattvas encircled around a large central Buddha, usually Sakyamuni or Vairocana; and the Dharmadhatu Vagishvara mandala, which features Hindu deities along its outer boundary acting as guardians.

Mandalas following Tibetan Buddhism are typically made as tangkas, or painted cloth scrolls, and also as sand paintings that are meant to be ritually erased. The two types of mandalas used are the Garbhadhatu and Vajradhatu. The Garbhadhatu or “womb realm” mandala is a series of concentric squares filled with images of Buddhas and bodhisattvas, enclosing a central circle of the Five Tathagathas, typically with the Buddha Vairocana in the centre. The Vajradhatu – which translates to “diamond or lightning realm” – mandala comprises a set of concentric squares whose sides are interrupted by a series of step-like forms, enclosed by bands of concentric circles. Mandalas may also be divided between the Five Tathagatas by way of colour coding, symbolism and cardinal directions. The mandala is also at times envisioned as an architectural diagram showing the ground plan of a pyramidal structure — which is often interpreted as Mount Meru — with the central figure at the summit.

While Buddhist, Hindu and Jain mandalas vary in structure, their shared Tantric roots mean that they have a few key characteristics in common: they are all used as a focusing mechanism in meditation, they feature a central deity with whom the devotee aims to merge, and they are often made as cosmic maps (arranged according to the sect’s particular beliefs), with Mount Meru as the axis mundi of the universe. Hindu mandalas, known as yantras, are largely geometric and circular in their structure and rarely feature human forms. When they do, the design is seen as the central deity’s spiritual abode, and may feature both square and circular forms. Yantras are made on a variety of surfaces, both in places of worship as well as domestic spaces. Jain mandalas, historically painted on large wall hangings or in illustrated manuscripts, form a major part of the religion’s cosmology, usually depicting the Lokpurusha, the Adhaidvipa Patta, or the twenty-four tirthankara of Jainism. The body of the Lokpurusha, or the cosmic man, is shown segmented into the three realms of early Jainism: Urdhva Loka or the celestial realm, Madhya Loka, or Earth, and Adho Loka, the netherworld. Adhaidvipa Patta, or the map of “two and a half continents,” is arranged as concentric bands of land with rings of ocean between them. The central island is Jambudvipa, the land of the jambu or rose apple tree.

Mandalas have also found their way into alternative belief systems in the West, particularly New Age practices, with some – such as the Swiss psychoanalyst Carl Jung – suggesting that they may be psychological tools through which the conscious self tries to assemble and harmonise with the unconscious.

An eleventh-century sculpture from the early medieval period, the Ardhanarishwara bronze statue is a composite…

[mapeiacarousel id=10820] An eleventh-century sculpture from the early medieval period, the Ardhanarishwara bronze statue is…

An Indian photographer best known for his industrial photography, Mitter Bedi was commissioned by several…

A popular lower garment worn by both men and women across India, the paijama, or…

A popular lower garment worn by both men and women across India, the paijama, or…

Kossak, Steven, and Edith W. Watts. The Art of South and Southeast Asia: A Resource for Educators. New York: Metropolitan Museum of Art, 2001.

Tanaka, Kimiaki. An Illustrated History of the Maṇḍala: From Its Genesis to the Kālacakratantra. Wisdom Publications, 2018.